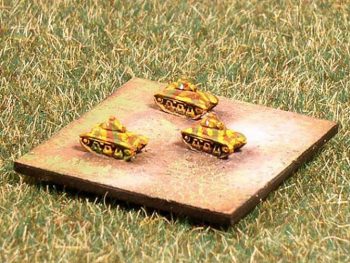 The Hotchkiss H35 or Char léger modèle 1935 H was a French light tank developed prior to World War II. Despite having been designed from 1933 as a rather slow but well-armoured light infantry support tank, the type was initially rejected by the French Infantry because it proved difficult to steer while driving cross-country, and was instead adopted in 1936 by the French Cavalry.

From 1938 an improved version was produced with a stronger engine, the Char léger modèle 1935 H modifié 39, which from 1940 was also fitted with a longer, more powerful 37 mm gun. It was intended to make this improved variant the standard light tank, with at least four thousand produced to equip new armoured divisions of both the Cavalry and the Infantry, but due to the defeat of France in June 1940 total production of both subtypes was limited to about 1200 vehicles.