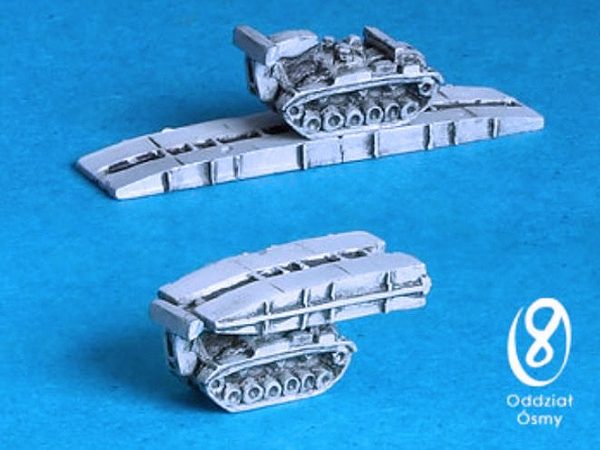 The M60 AVLB or Armored Vehicle Launched Bridge was introduced in 1987. This combat engineering vehicle was developed by General Dynamics to replace the previous M48 AVLB. It is designed to launch bridge for tanks and wheeled combat vehicles across trenches and water obstacles in combat conditions. It is in service with the US Army and Marines. The chassis of the M60 AVLB is almost identical to that of the M60A1 main battle tank, though the turret has been removed and replaced with a bridge-launching system. Driver’s position is located further back. Some bridgelayers were converted from the M60A2 Starship MBTs, that were withdrawn from service. The scissors-type bridge weights 14.65 tons and is made of aluminum. It has a length of 63 feet and can span a gap up to 60 feet. On the vehicle it is carried folded and launched over the front hydraulically. When emplaced, the bridge is capable of supporting tracked and wheeled vehicles with a military load bearing capacity up to Class 70. When the vehicle has reached the space to be bridged, the bridge is raised into the vertical, unfolded and then lowered into the place. The launcher is then detached. Bridge emplacement can be accomplished in as little as minutes. The bridge can be retrieved from either end. Recovery time is between 10 and 60 minutes, depending on terrain conditions. The M60 has no armament and as such is solely a combat support vehicle. It has a crew of two, including commander and operator. Its maximum speed (governed) is 30 mph with an off road speed of 8–12 mph and a range of 290 miles.