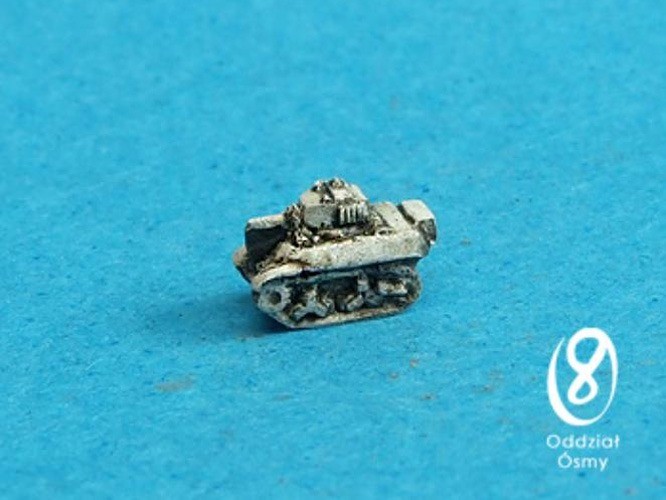 Light Tank M3A3 (Stuart) was an armored vehicle (tank, AFV or armoured fighting vehicle) in combat use during the Second World War (World War II or WWII) in various theaters. The name “”General Stuart”” or “”Stuart”” given by the British comes from the American Civil War Confederate General J. E. B. Stuart. The M3A3 was a fully tracked all-terrain vehicle designed for military operations. Stuarts were the first American-crewed tanks in World War II to engage the enemy in tank versus tank combat. The first series M3 was a cavalry tank and, as such, not meant to deal with other tanks, but only occasional infantry and other scouting forces. But with no less than five .30 caliber (7.62 mm) machine guns of the highly reliable M1919 type, in addition to a rapid-fire M6 37 mm (1.45 in) gun, the M3 was a deadly package in itself, despite lacking heavy firepower. The M3A3 benefited from the improvement in hull design performed on the M5 light tank. Its main feature was a sloped 20° thickened armor, welded hull, which greatly improved their survivability. It was just slightly heavier, but easier to produce than the original one. They also had a turret rear overhang to house a radio. The M3A3 hull was also roomier, and this space was used to add more fuel and ammunition storage. Regular storage amounted to 174 rounds for the M6 gun with M44 mount and 7500 rounds for the three M1919A4 machine guns. The turret originally had a basket, but crew practice was to remove to free space. Critics, however, still argued that their main gun was no match for any German tank of the time and their still high profile made them easy targets, despite their improved speed. These reasons, among others, explain why these tanks were most of the time relocated to the Far East, India and the Pacific, where they could deal more easily with Japanese tanks. In the European theater these tanks were used in conjunction with the more powerful M4 Sherman medium tanks, as screening and scouting armored wings. The M3A3 had a range of 100 mi and a top speed of 36 mph on road and 18 mph off-road.