Andrew Bishop (Bish) is a wargamer, modeller and compulsive collector of wargames rules. He started wargaming in the mid-80s, focusing on ‘Moderns’ gaming (Cold War era now) with 6mm miniatures. Over the years he has played many other scales and periods, including WW2, Napoleonics, and Ancients, but Moderns remains his passion.

Bish’s primary gaming interest is ‘Moderns’ in all scales (Cold War through ‘Ultramodern’), with small-scale Moderns as his particular focus. Researching, painting, building terrain and playing high-level games with small-scale miniatures occupies most of his hobby time. He enjoys playing historical scenarios, as well as indulging in a bit of ‘what-if’ and fictional ‘imagi-nation’ gaming – anything to get the toys on the table really! Much of his gaming activity is posted on his “TinyTanks3mm” blog.

When not wargaming, Bish enjoys watching sports (most sports really, but particularly Rugby, NFL and EPL Soccer) as well as going to see his local Super Rugby team in Canberra, the Brumbies. You can reach Bish via the PicoArmor site. 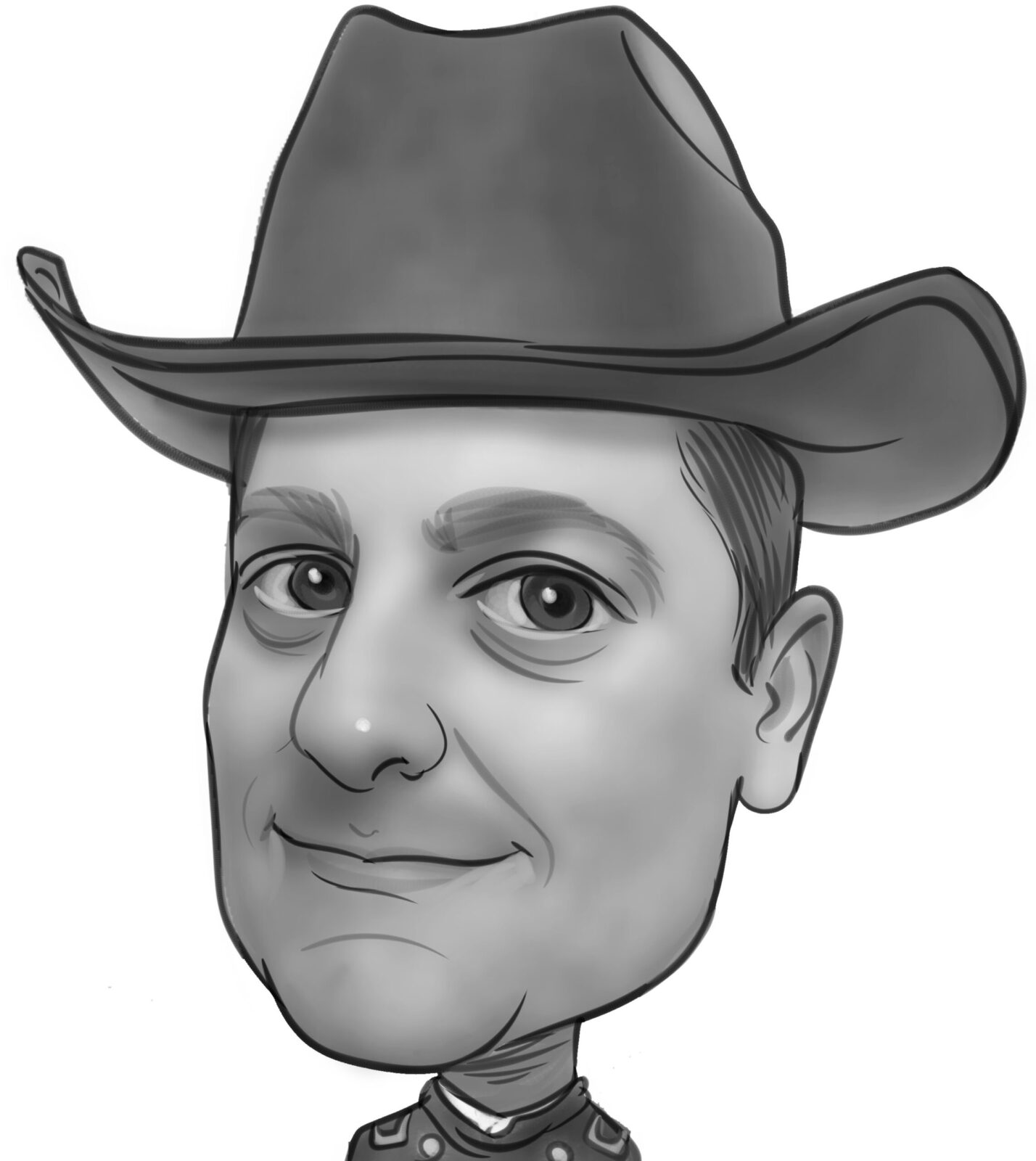 Steven D. Fratt, Ph.D. is a Professor of History at Trinity College, Bannockburn, Illinois where he oversees the Military History emphasis in the History Major. He also serves as the Colonel Commanding 1st Brigade, Illinois Volunteers [Reenactor Federal Army in Chicago area] and is President of the Historical Miniatures Gaming Society – Midwest based in Chicago.

Steve’s initial experience with wargaming was with Louis/Marx playsets and homemade rules inspired by all the great epic movies in the sixties. Trips to the library to check out the American Heritage Civil War book with David Greenspan battlefield painting were also important. Trips to Bill’s Toystore every month poised the burning question – should I save up for an Avalon Hill game or spend allowance now on Airfix soldiers or Roco Minitanks?

A major turning point came when dad brought home How to Play Wargames by Joseph Morcauser. Jack Scruby of California was listed in the back so Steve began buying Scruby 20mm ancients with hopes of building Napoleonic armies as well. A semester in Europe introduced Steve to Heroics and Ros 6mm troops and that propelled him into the micro-scale universe. Steve took on an 11 credit honors project [200 pages] in history on the Waterloo Campaign and built a scale model of the battle populated with 8,000 6mm troops.

While in graduate school at US Santa Barbara, Steve ran into George Jeffrey and Paddy Griffith. This began a decades long collegial relationship leading to Steve’s role in as a consultant for Griffith’s Battle Tactics of the American Civil War [1989] and his own “American Civil War Tactics” in the Indiana Military History Journal [1987]. The latter has had continued influence in the Civil War scholarly community. Most recently, Earl Hess noted Steve’s article in his own Civil War Infantry Tactics [2016]. Over the last 20 years Steve has contributed articles to Strategy and Tactics and North and South.

For the last 27 years at Trinity, Steve has built over 80 epic-scale games with hand painted maps [versions of Axis and Allies games and Command and Colors] with miniatures to teach his students history. He also is a Tolkien scholar teaching the History of Middle Earth using miniatures as well.

Steve’s latest projects include the development of a series of kriegspiel type miniatures games he calls Frattspiel. The first in this line is FrattNap: 6mm Napoleonics from a Different Point of View. Ancients, Medievals, Civil War, and World War II to follow. 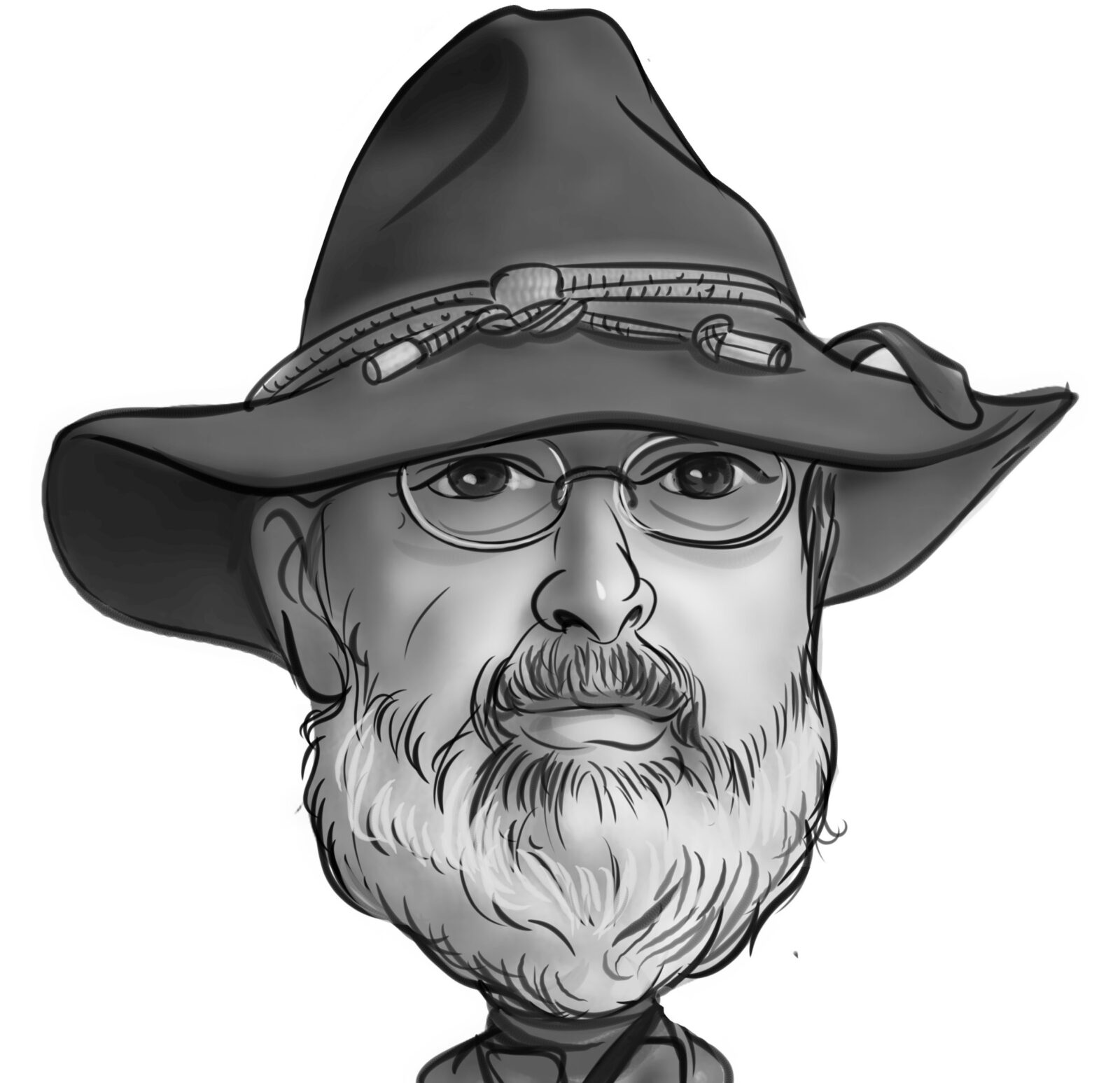 Zach Duckworth is a wargamer, veteran and graduate student. He started wargaming in 1993 at age 12, focusing on Warhammer 40k (like most 12 years-olds).

His current areas of interest are Napoleonics and other Horse and Musket wars. He is particularly interested in the interplay of time, ground scale and cognition on the battle field. He likes to take on projects that are new or novel in conception (when he’s not too busy with school). 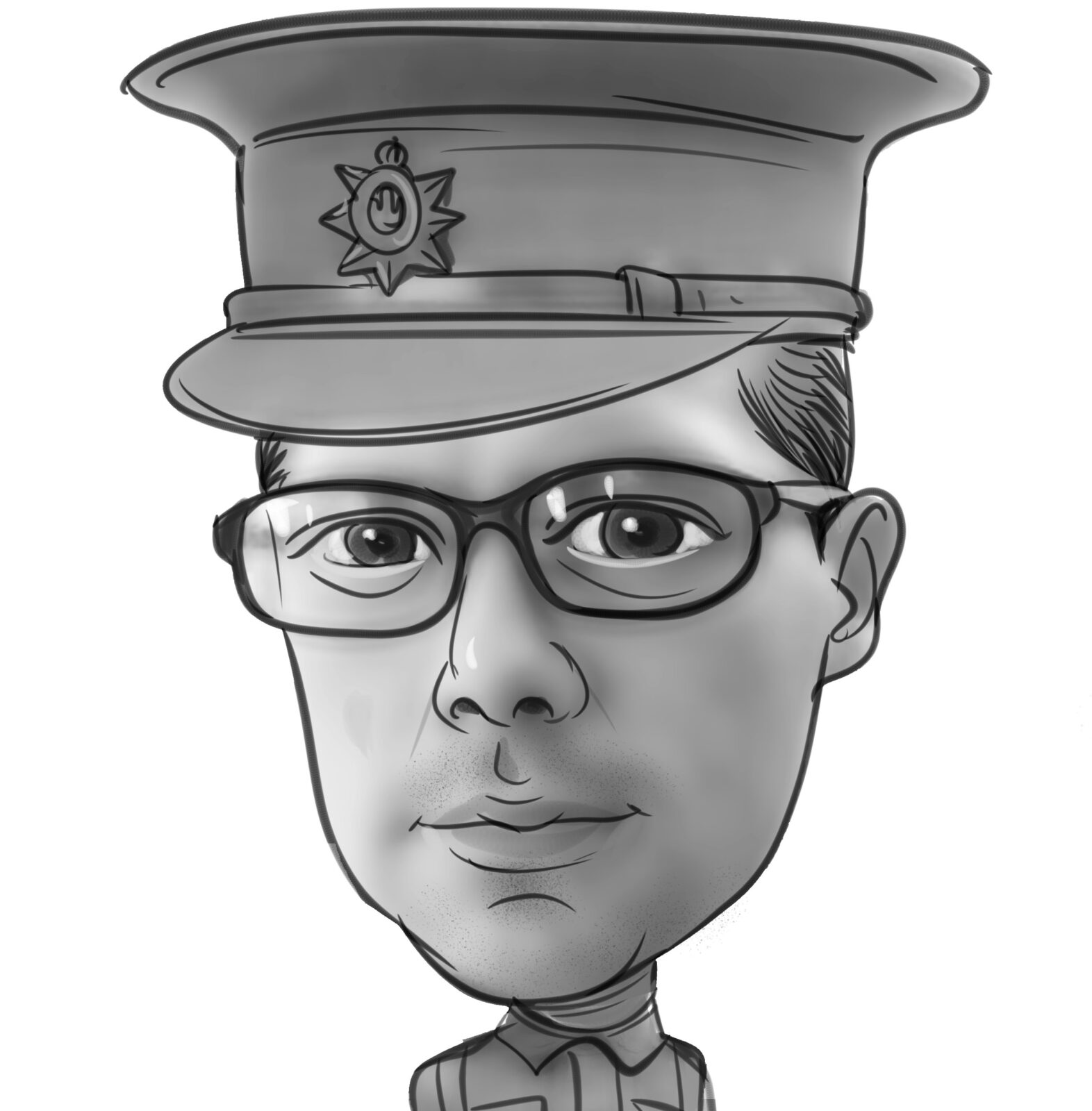 Jim Roots has been playing wargames for more than 40 years, starting with Avalon Hill’s Guadalcanal. His education includes a master’s degree in history from the University of Illinois. His real life job is in advertising, where he is a partner at Hoffman York in Milwaukee, WI. His ‘pretend’ job the past few years was as a partner at Ambush Alley Games where he worked on Force on Force, Tomorrow’s War with Shawn Carpenter. He was lead author on the FoF supplements Cold War Gone Hot (nominated for an Origins Award in 2011) and Classified: Special Operations Since 1940. His current miniatures interest are scattered throughout the space-time continuum, but recent activities include Starship Troopers, Congo, SAGA and Frostgrave. He enjoys painting and modeling nearly as much as he enjoys running and playing games. He owns miniatures in just about every scale and maintains a secret altar in his basement workshop where he daily prays to the dice gods to send talented elves to paint his boxes of unpainted lead.

Jim also enjoys RPGs (the dice kind), Chicago Blackhawks’ games and plays piano, guitar and harmonica semi-professionally. (He also plays the kazoo, the jaw harp and the didgeridoo – but alas! he only receives money to NOT play the last three). 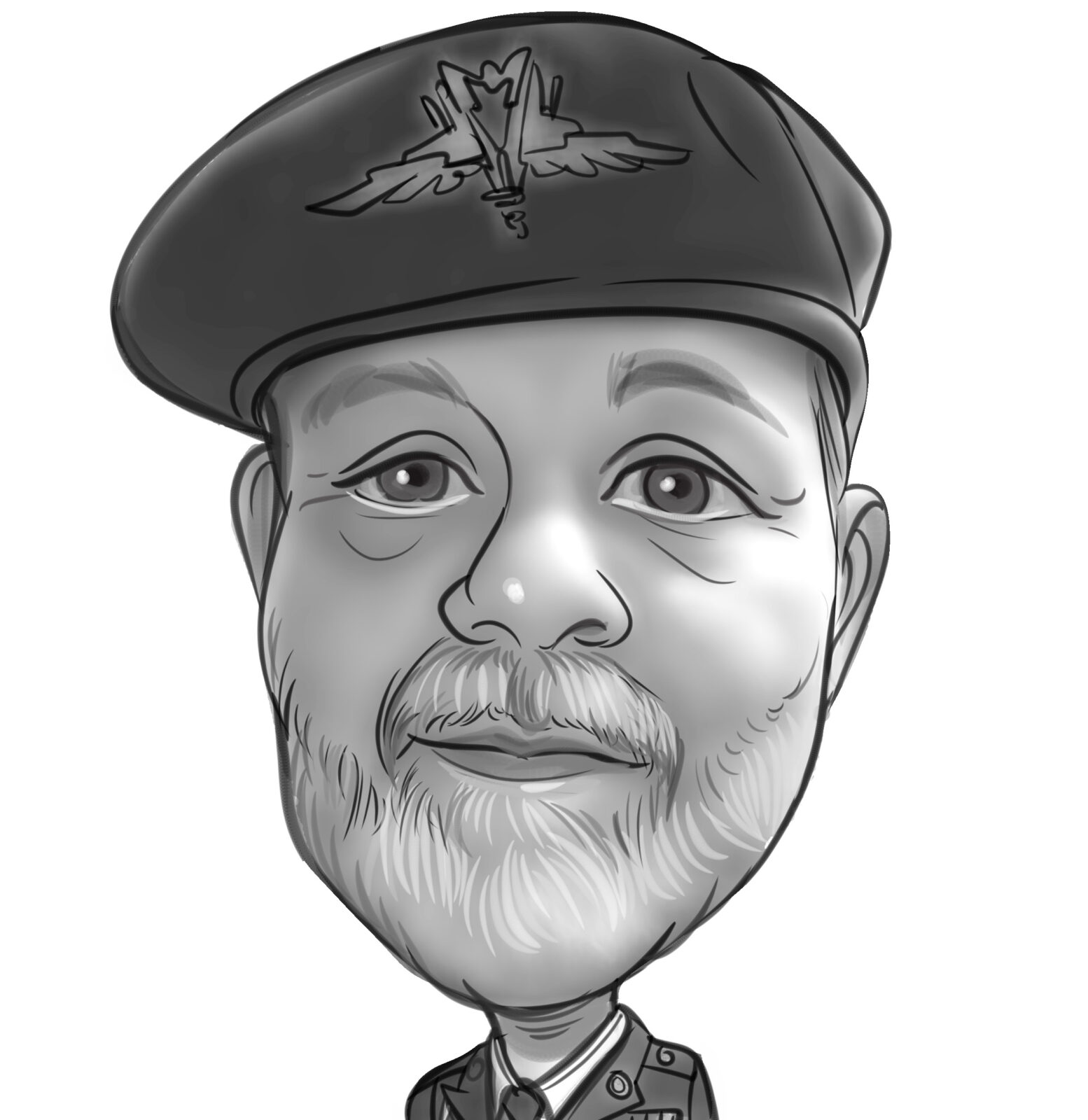 John Siewenie is a wargamer, veteran, and electrical engineer. He started wargaming in the 1970’s beginning with Fast Rules, Angriff, and then suffering through Tractics. With his teenage buddies, he also played nearly every release by Avalon Hill, SPI, and the monthly wargames in S&T magazine.

He is the founding partner of PicoArmor, and is perhaps his own best customer for modern and WW2 eastern front miniatures. His first love and ongoing interest is mechanized warfare and he fancies himself a diabolical opponent when he plays the Soviets.

His current interest is gaming at the grand tactical or operational level, where that the tank’s treads are as much of a weapon as its cannon.

Other interests include RPGs such as D&D and Call of Cthulhu, reading insatiably, and drinking fussy craft beers.

Rob Heath is a general maintenance engineer covering electrical and pressure systems for Control Systems (PLC). He has worked in the food and laundry industry for the last 30 years and resides in the UK.

He has been a wargamer for the past 40 years and is currently working on designing terrain and modules for the Roll20 platform. He is interested in all aspects of the industry including tabletop games, board games and RPG’s together with an extensive interest in military history.

Jon Yuengling is a US Navy veteran, serving on submarines, a wargamer and a technology professional Jon has been part of this hobby starting with playing Wooden Ships and Iron Men, an Avalon Hill classic, during the American Bicentennial. He was often painting and playing with his Airfix figures and stretching existing rules at hand to include allowing him to use Modern Cold War rules with his World War I miniatures.

Since then he has been playtesting systems for several companies, both board and miniature, including Fighting Wings and Great Campaign of the American Civil War, proofreading for TOOFATLardies system and writing for Hasbro, the TOOFATLardies seasonal specials and the Avalon Hill house magazine “The General”. Jon is currently working on an air-sea naval system for the Cold War era and is an active supporter of the hobby at his local clubs, by blogging and continuing his studies and research in Middle Eastern history.
With an undergrad in history and masters in Organizational Leadership, Jon is able to utilize his studies and life skills in everyday business activities. These include tackling the latest issues with a 50+ year-old computer language to best generate social media engagement. What wargamer out there is not eclectic?

Kevin was 11 back in 1969, when a classmate asked him to play a game called “Blitzkrieg”, and soon thereafter all the Avalon Hill games they could afford. This dovetailed nicely with an early love of military history. By 1973, he was going to cons such as Gencon, and Citex where he discovered miniatures. Thereafter spending his all hard earned money on Humbrol paints and Minifigs. With his friends they formed the WUMMS group and gamed everything that was available, until they split up for college. He then spent the next 14 years as an Armor Officer, serving in combat units equipped with every type of tank in the inventory (M48A5, M551A1, M60A1, M60A3 thru M1). He is the author of Jagdpanzer, (WWII armor combat) which is now in its 5th printing, Sand Oil and Blood (modern armor combat). He has developed the Casualty Card gaming play aids, and co-authored on GHQ’s Mekong, and contributed to Luftwaffe 46, At Push of Pike, and Frontlines: Korea.

Along with his wife, who after 33 years has evolved into a quite gamer herself, they own and operate Kristopher’s Consultants, an executive search firm serving the design/build industry. He is a prolific GM and loves running games at cons and local clubs. For the past 4 years he has been the organizer of the Games Plus-Wednesday Night Miniature’s game where they put on 48 scenarios a year. He has also been serving on the HMGS-Midwest Board since 2015.

There would have been more, but he took a hiatus while he coaching his two sons in sports. During this time, aside from Gencon every year, he coached them in over 1000 baseball games from Traveling to the High School level. 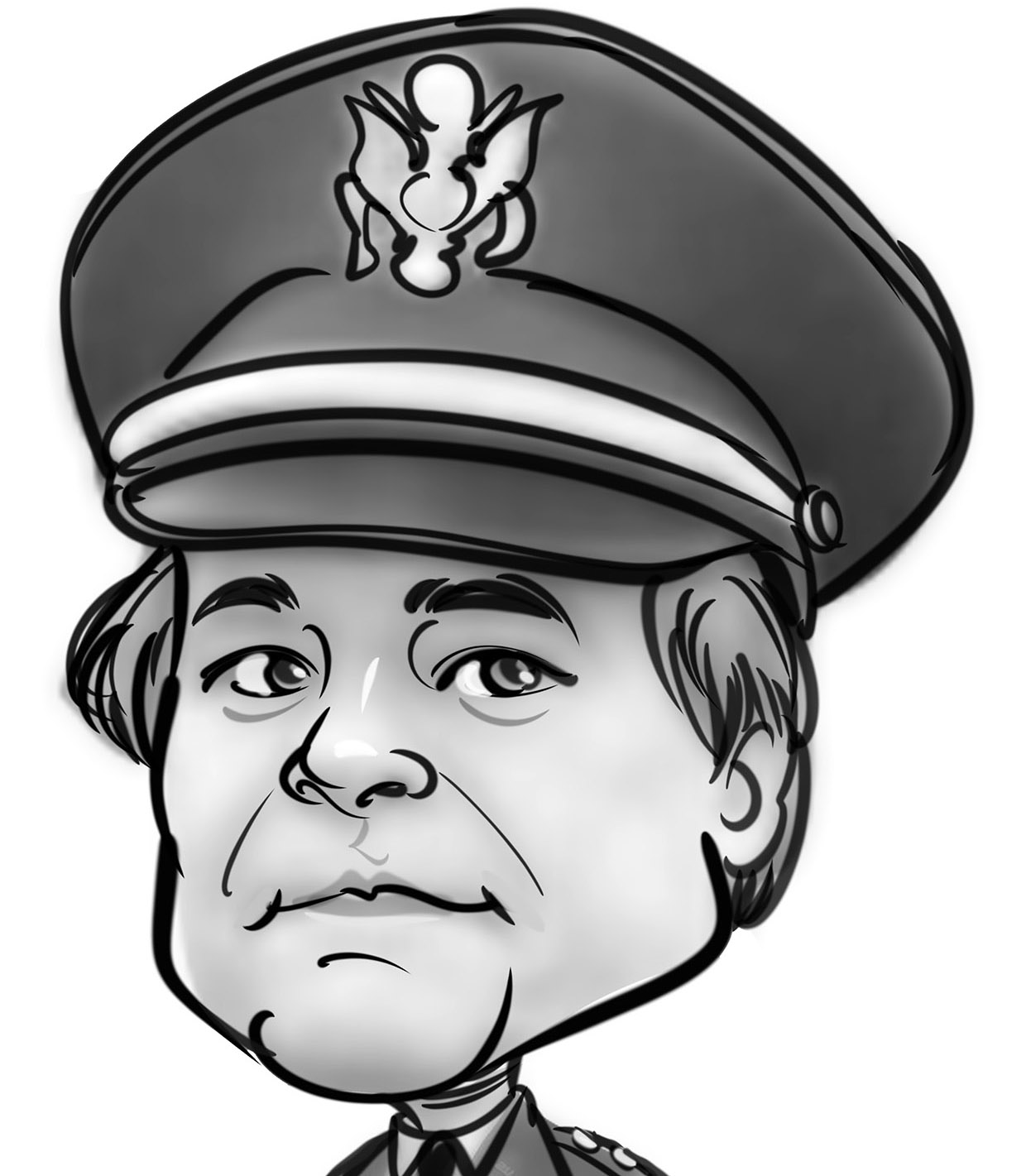