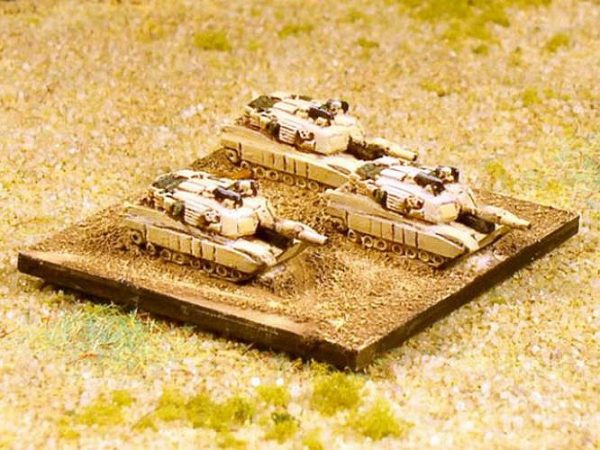 The M1A2 Abrams main battle tank is a further development of the M1A1. Currently it is one of the best MBTs in the world. Development of the M1A2 began in 1988. About 1 200-1 500 M1A2 main battle tanks were delivered to the US army. Out of this number approximately 1 000 out-dated M1 main battle tanks were upgraded to the M1A2 standard. It is planned that this tank will remain in service beyond 2050. The Abrams is protected by Chobham composite armor. Protection of the M1A2 was improved by using depleted uranium mesh at the front of the hull and turret. It offers significant protection against all known anti-tank weapons, however overall weight increased comparing with the M1A1. Protection of the M1A2 Abrams is considered as one of the best in the world. Ammunition for the main gun is stored in the turret bustle, fitted with blow-out panels. Interior is lined with Kevlar liner for protection against spalling. The M1A2 Abrams can be fitted with explosive reactive armor blocks. Some M1A2 tanks are equipped with missile countermeasure devices, intended to detect and jam guidance of the laser-guided missiles. Vehicle is armed with the M256 120-mm smoothbore gun, originally developed by Rheinmetall and manufactured under license in USA. This gun is loaded manually. The M1A2 has an improved fire control system and its components. Range of effective fire in excess of 4 km. The M1A2 has a target acquisition system with hunter-killer capability. Secondary armament consists of coaxial 7.62-mm machine gun, another 7.62-mm MG mounted over the gunner’s hatch and 12.7-mm MG mounted over commander’s hatch. Vehicle has a crew of four, including commander, gunner, loader and driver.