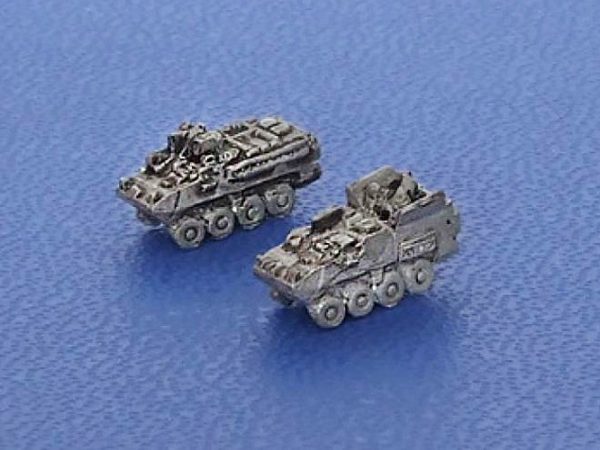 The Stryker is a family of eight-wheeled, armoured personnel carriers (derived from the Canadian LAV III/Swiss MOWAG Piranha IIIH 8×8) used by the United States Army. The Infantry Carrier Vehicle provides protected transport and, during dismounted assault, supporting fire for the infantry squad. The Stryker is a full-time four-wheel drive, selectively eight-wheel drive, armoured vehicle weighing approximately 19t which carries an infantry squad with their equipment. On paved roads the vehicle can attain speeds of 62 mph and a range of 311mi. M1127 Reconnaissance Vehicle is a variant of the Stryker designed for reconnaissance. The RV provides an effective platform for RSTA Squadrons and battalion scouts to perform reconnaissance and surveillance operations. The RV accommodates seven personnel, including crew.

The platform is a key enabler for both sensor and HUMINT focused surveillance and intelligence operations. M1129 Mortar Carrier is a Stryker variant in use by the US army. armed with Soltam 120 mm Recoil Mortar System (RMS) provides in-direct fire support to fellow infantry with screening obscurants, suppressive forces and on-call supporting fires (HE, illumination, IR illumination, smoke, precision guided, and DPICM cluster bombs). Precision Guided Mortar Munition (PGMM) attacks point targets at extended ranges with GPS guidance. M1129B is only capable of firing its weapon from the mounted position within the vehicle.