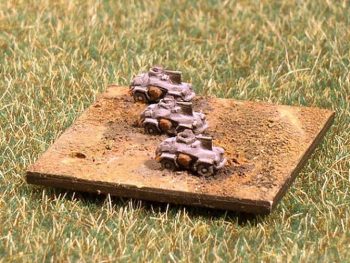 Designed to meet operational requirements including reliability, run on a variety of grades of fuel, simple construction and good off-road performance the first such vehicle was the Sd Kfz 221 but this proved too small and too lightly armed, so in 1936-37 a heavier version was planned, using one of two standard chassis for four-wheel armoured cars, one with a front-mounted engine, the other rear-mounted version, was used in the Sd Kfz 222, which became the standard light armoured car in German army service until the defeat of Nazi Germany.[1]