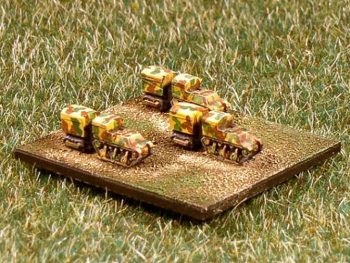 The Lorraine 37L or Tracteur de ravitaillement pour chars 1937 L, (“Tank Supply Tractor 1937 L”) was a light tracked armoured vehicle developed by the Lorraine company during the Interwar period or Interbellum, before the Second World War, to an April 1936 French Army requirement for a fully armoured munition and fuel supply carrier to be used by tank units for front line resupply. A prototype was built in 1937 and production started in 1939. In this period also two armoured personnel carriers and a tank destroyer project were based on its chassis. Mainly equipping the larger mechanised units of the French Infantry arm, the type was extensively employed during the Battle of France in 1940. After the defeat of France, clandestine manufacture was continued in Vichy France culminating in a small AFV production after the liberation and bringing the total production to about 630 in 1945. Germany used captured vehicles in their original rôle of carrier and later, finding the suspension system to be particularly reliable, rebuilt many into tank destroyers (Panzerjaeger) of the Marder I type or into self-propelled artillery.