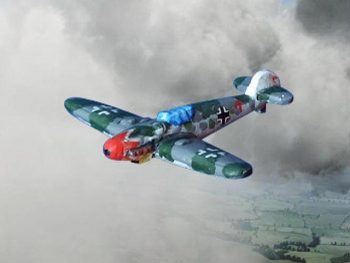 Most numerous version of Bf-109 equipped with DB-605 engine

The Bf 109 G-series was developed from the largely identical F-series airframe, although there were detail differences. Modifications included a reinforced wing structure, an internal bullet-proof windscreen, the use of heavier, welded framing for the cockpit transparencies, and additional light-alloy armour for the fuel tank. It was originally intended that the wheel wells would incorporate small doors to cover the outer portion of the wheels when retracted. To incorporate these the outer wheel bays were squared off. Two small inlet scoops for additional cooling of the spark plugs were added on both sides of the forward engine cowlings. A less obvious difference was the omission of the boundary layer bypass outlets, which had been a feature of the F-series, on the upper radiator flaps.[59][60]

Like most German aircraft produced in World War II, the Bf 109 G-series was designed to adapt to different operational tasks with greater versatility; larger modifications to fulfil a specific mission task, such as long-range reconnaissance or long-range fighter-bomber, were with “Rüststand” and given a “/R” suffix, smaller modifications on the production line or during overhaul, such as equipment changes, were made with kits of pre-packaged parts known as Umrüst-Bausätze, usually contracted to Umbau and given a “/U” suffix. Field kits known as Rüstsätze were also available but those did not change the aircraft designation. Special high-altitude interceptors with GM-1 nitrous oxide injection high-altitude boost and pressurized cockpits were also produced.