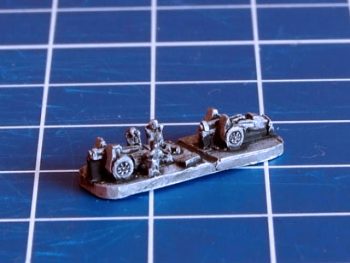 The 15 cm sIG 33 (schweres Infanterie Geschütz 33) was the standard German heavy infantry gun used in the Second World War. It was the largest weapon ever classified as an infantry gun by any nation.[1]

Sources differ on the development history, but the gun itself was of conventional design. Early production models were horse-drawn, with wooden wheels. Later production models had pressed steel wheels, with solid rubber tires and air brakes for motor towing.

The sIG 33 was rather heavy for its mission and it was redesigned in the late 1930s to incorporate light alloys in an effort to save weight. This saved about 150 kilograms (330 lb), but the outbreak of war forced the return to the original design before more than a few hundred were made, as the Luftwaffe had a higher priority for light alloys. A new carriage, made entirely of light alloys, was tested around 1939, but was not accepted for service.