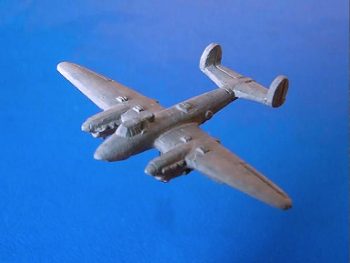 The Petlyakov Pe-2 (Russian: Петляков Пе-2) was a Soviet light bomber used during World War II. It was regarded as one of the best ground attack aircraft of the war[2] and it was successful in the roles of heavy fighter, reconnaissance and night fighter.[3] It was similar in many respects to the British de Havilland Mosquito. Pe-2s were manufactured in greater numbers (11,427 built) during the war than any other twin-engined combat aircraft except for the German Junkers Ju 88 and British Vickers Wellington.[3][4] The Pe-2 was fast, maneuverable and durable. Several Communist nations flew the type after the war, when it became known by the NATO reporting name Buck. Six captured Pe-2s were also transferred from the Germans to the Finnish Air Force during the Continuation War, with the serial code PE- and the unofficial nickname Pekka-Eemeli.