I picked up a copy of Sam Mustafa’s ‘Blucher’ a few months ago, and since our local gaming group has had the opportunity to play the rules a few times this spring and summer I thought I’d pass along our impressions of the game.

In terms of game scale ‘Blucher’ is aimed at the brigade-level, allowing players to recreate those huge battles so iconic of the period.  Wagram, Borodino, and even Leipzig are all well within reach with this system. In order to do this ‘Blucher’ requires the players to accept a certain level of abstraction. For example, each unit on the tabletop roughly equates to a brigade of infantry/cavalry, while the artillery is modeled either as a concentration of guns (around 18 or so) or as being attached to individual brigades as dedicated batteries.

So when you look at one of the 3″x2.5″ unit cards you have to imagine a space of several hundred yards on each axis which is populated with 2-4 infantry battalions, or 2 cavalry regiments, or several batteries of guns all potentially arrayed in a variety of formations. While the grand-tactical scale of ‘Blucher’ won’t be to everyone’s taste (and really, what rules can claim that?), for myself I find it really appeals to that portion of my lizard brain which has always loved the grand scope and scale of the era. In my mind’s eye, when I look at the table, I can see these huge formations moving across the landscape, banners waving, clashing and recoiling in amongst clouds of powder smoke and the thunder of cannon. Great stuff! 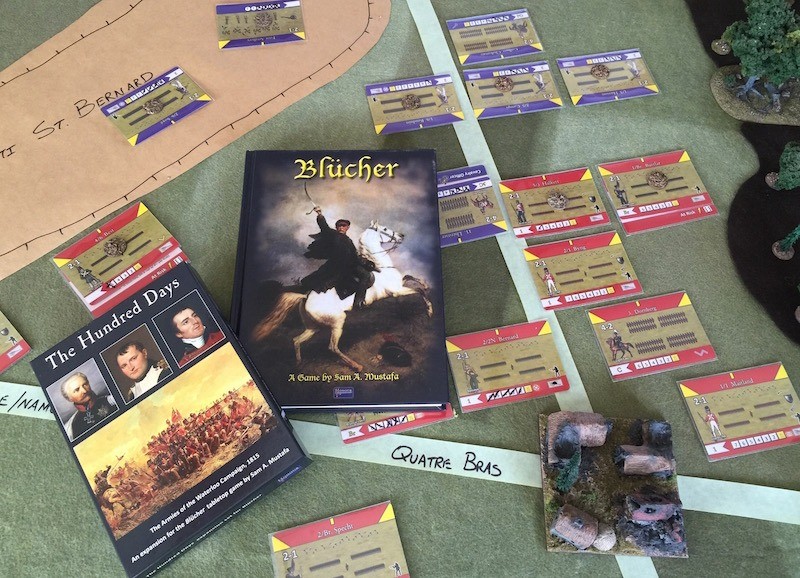 The unit cards themselves are pure genius. They contain most of the information players need to keep track of the unit: name, organization, strength, movement rates and any special abilities. Once you slip them into clear plastic sleeves you can easily track hits and make notes with water-soluble markers. 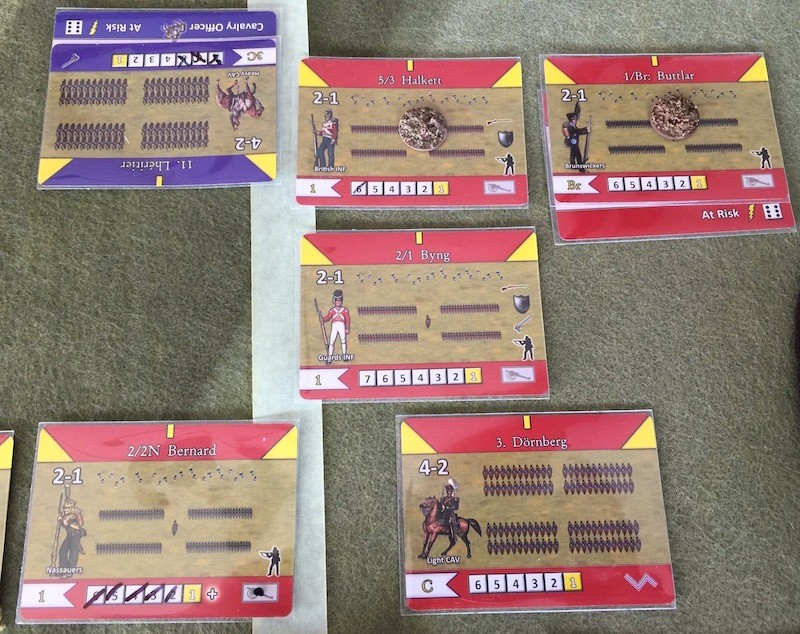 I was chatting with the guys about the cards the other night and we all reminisced that, as young sprouts, we spent months (if not years) painting hundreds of napoleonic figures just to get our first game in. Over the intervening years I have seen loads of models at ‘bring-and-buy’ tables and on the internet from players who have either lost steam, discovered that they didn’t like the period, or found that the rules offered did not appeal to them. With ‘Blucher’s’ use of cards (either bought in the ‘Hundred Days’ package or easily downloaded and printed on coloured paper), players can be playing within hours of reading the rules, allowing them to determine not only if the rules are for them, but if collecting figures is what they want to do. In effect, it makes the rules incredibly accessible and allows players to get a taste of the genre before making the decision to whole-heartedly plunge into buying figures, terrain, etc. 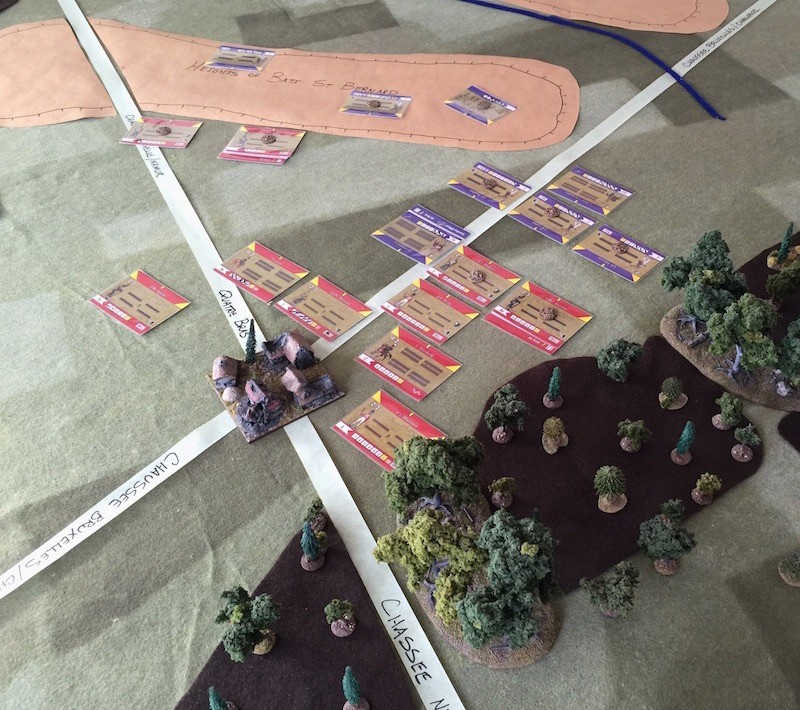 As for our group, since April we’ve been playing ‘The Hundred Days’ campaign which, as I mentioned earlier, is offered as a separate add-on to ‘Blucher’. The expansion provides cards for all the combatants who were involved in the Waterloo campaign, even allowing for a few ‘what ifs’ by including units which were historically on the flanks, guarding rear areas, and so were not present at the actual battle. Nonetheless, with this system you can choose how you want to organize your forces and modify you deployments to create those fascinating ‘what ifs’ that are often discussed regarding those famous days in June, 1815.

For our campaign, we have eight players (four French and two each for the Prussians and Anglo-Allied contingents) while I am standing in, with whip and chair, as referee.

For an added bit of fun I decided to conduct the campaign in double (triple?) blind, that is where the players have very limited knowledge of the movements and intentions of not only the enemy, but of their own allies as well. This limited intelligence (no comments from the wags pleeeaze) is mitigated through aggressive scouting, effective communication and good old-fashioned blundering around the countryside. I ask the teams for their daily orders and then I secretly conduct their movements on my own map (which has the full picture), notifying them of any sightings, reconnaissance, events, etc. In many respects it’s much like classic Kriegspiel. 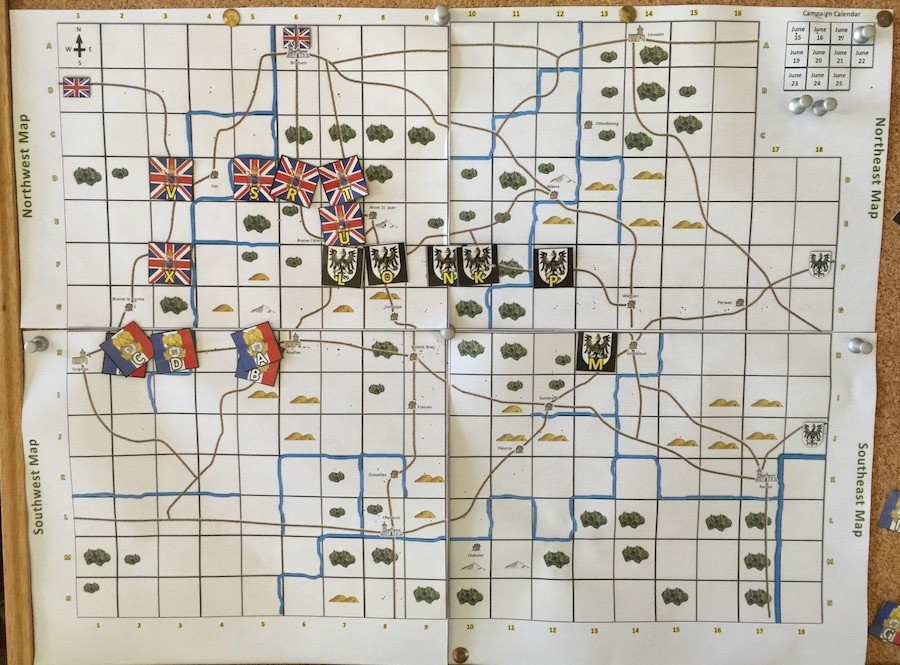 We’re now at the closing chapter of the campaign and it’s do-or-die for both the French and Allies. In fact, I think our next battle will pretty much decide the issue. A real nail-biter to be sure.

The whole experience has really been excellent and I must take my hat off to the players for making it such a success. The guys have really embraced the various personalities of the period. Napoleon is supremely confident and dismissive of the Allies while his wing commander, Ney, is a worn-out maniac with a death wish; Blucher is suitably irascible and seems to suffer from a touch of dementia while his chief of staff, Gneisenau, is highly suspicious of the English; Wellington is suitably xenophobic and has a constant eye on the Channel ports, just in case he has to make a quick dash to save Britain’s only army. So, while the guys get to have fun playing the games and chewing up the scenery with the various characters, I in turn, have had a tremendous thrill watching it all unfold, reading all the correspondence and hearing the backroom planning. All in all, it’s a wonderful recipe for a few months of gaming.

Okay, the other part of this post is to show what figures I’ve been working on these past few weeks. 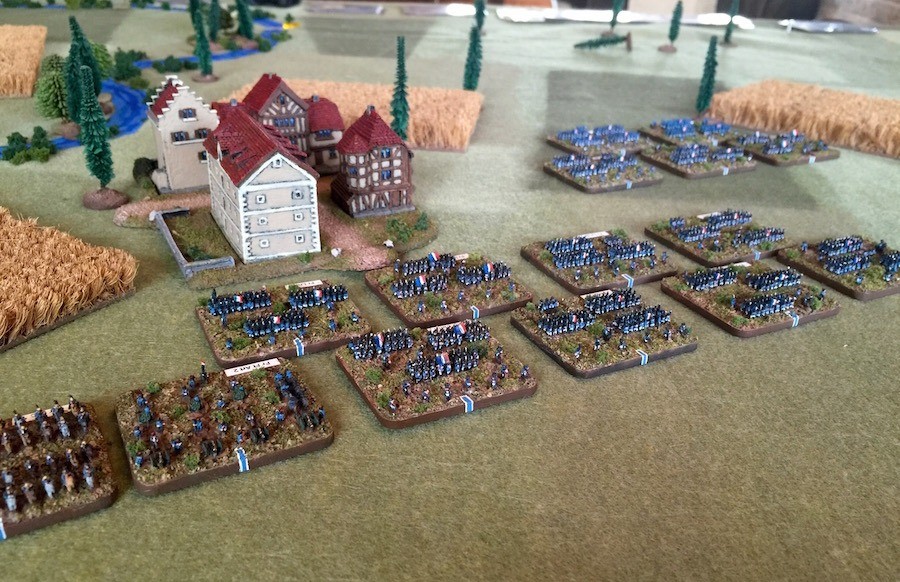 These are 3mm Napoleonics from Pico Armor (sourced from Oddzial Osmy out of Poland, I believe). The figures are based on 2″ x 1.75″ MDF bases. I asked Byron (over at SG2 Creations) to fabricate these bases with a 3mm thickness and with rounded corners. The thickness is to allow players to pick them up easily and the rounded corners is simply because I like the look of them (it seems to give the finished product a wargaming chit look).

The common standard for ‘Blucher’ is a 3″ frontage, but I’ve decided to go with 2″ as it allows for quite large battles to be played on the 8 x 5 surface which I typically use. To provide a bit more perspective, in this scale each inch equates to 150 yards, so one square foot on the tabletop is equal to about a square mile. Utilizing this scale allows us to recreate sprawling actions like Wagram or Vitoria on a single tabletop – in effect, it is like a quasi 3D map exercise. 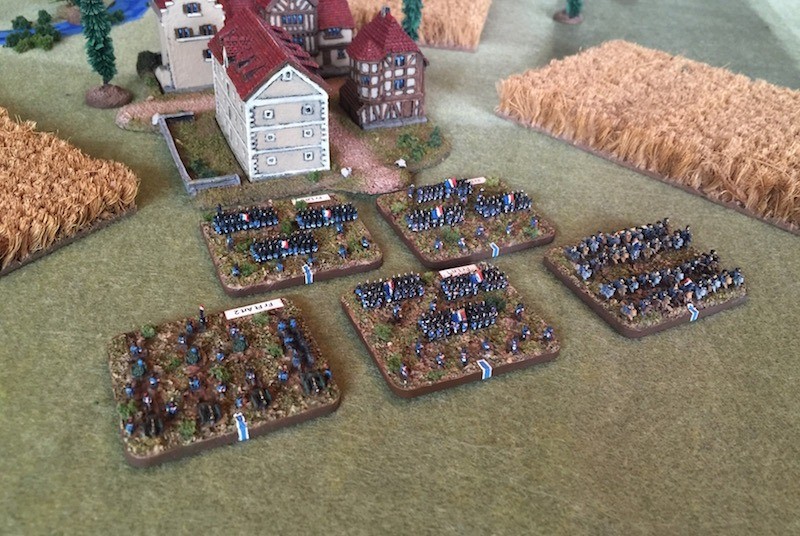 For my way of thinking, painting these figures demands a VERY minimalist approach. The following list is what I’ve come up with to balance speed of production with maintaining a basic level of detail to communicate what the figures are supposed to be:

1) I glue the strips of figures to the base in groupings of three or four ‘battalions’ (3 ranks of 10 figures each) along with a few leader types (mounted officer and some trailing NCOs and junior officers on foot). Since these are French, I usually include a skirmishing screen at the front to reflect their tactical doctrine of using light troops. Every once in a while I’ll include an artillery piece or a regimental band to break up the monotony and add a bit of visual interest. When all is said and done this gives a base with approximately 100 – 130 figures on it. 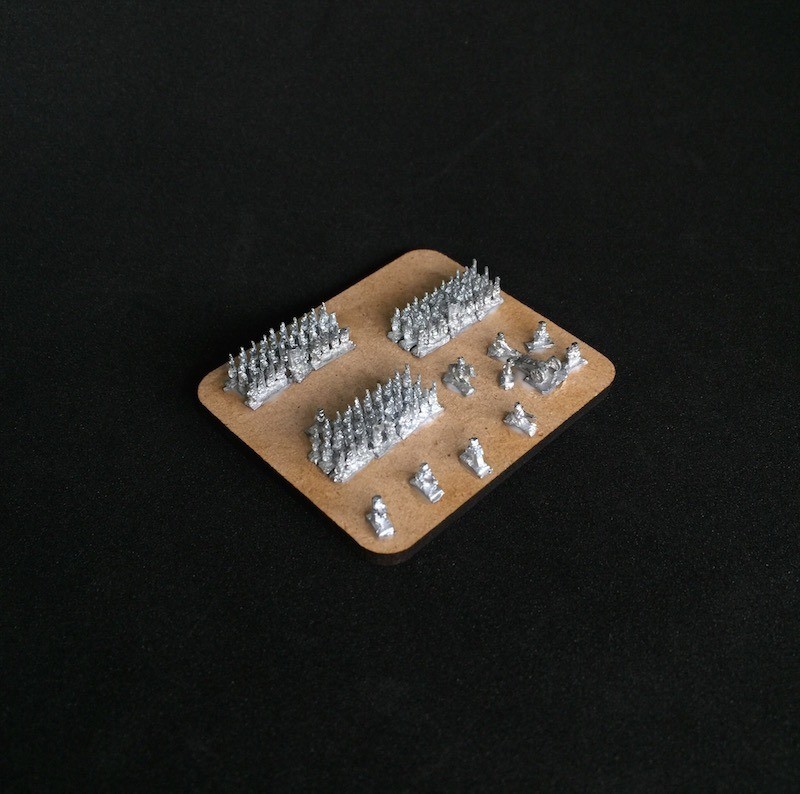 For heavy cavalry (i.e. cuirassiers) I base the figures in four ranks to give the impression of a mass of horsemen, whereas the medium cavalry (dragoons) get three ranks and light cavalry (Hussars, chasseurs, etc.) are setup with two lines. I do this in order to give players a visual clue to what they’re looking at on the tabletop.

For foot artillery I put four guns along with a ‘trail’ of caissons and support troops behind them. For horse artillery I just increase the amount of horses on the base.

2) Once the figures are glued down I then lay down a very thin skim coat of artists’ gel medium. This provides some texture for the groundwork and helps to mask the transition between the figure strips and the surface of the MDF base. I leave a small area clear at the rear corner of the MDF base as I will need the space to affix the printed unit label.

3) I then prime the whole base using a dark brown spray, making sure to get into all the nooks and crannies of the formations. I often touch up with a soft brush to ensure I have complete coverage. 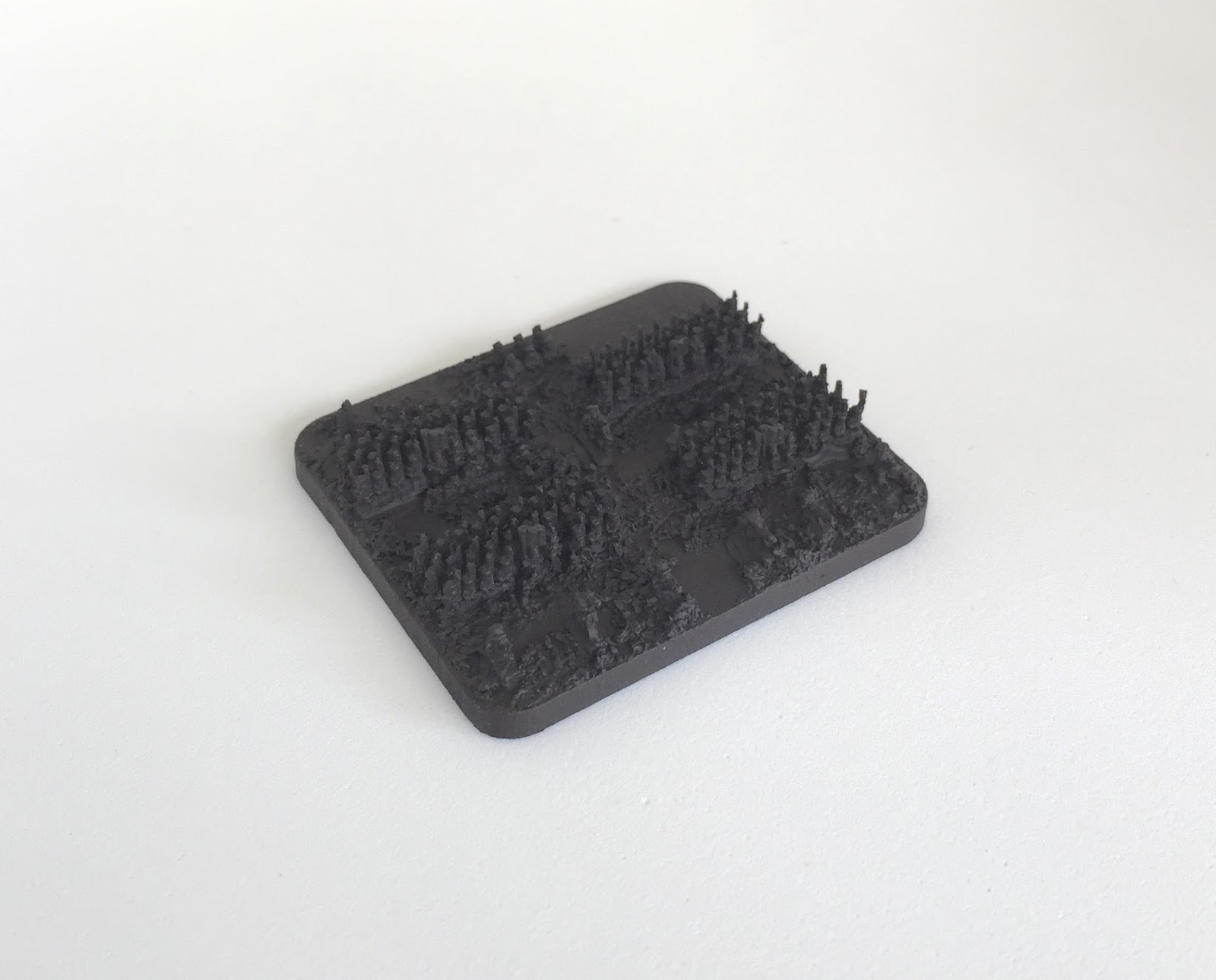 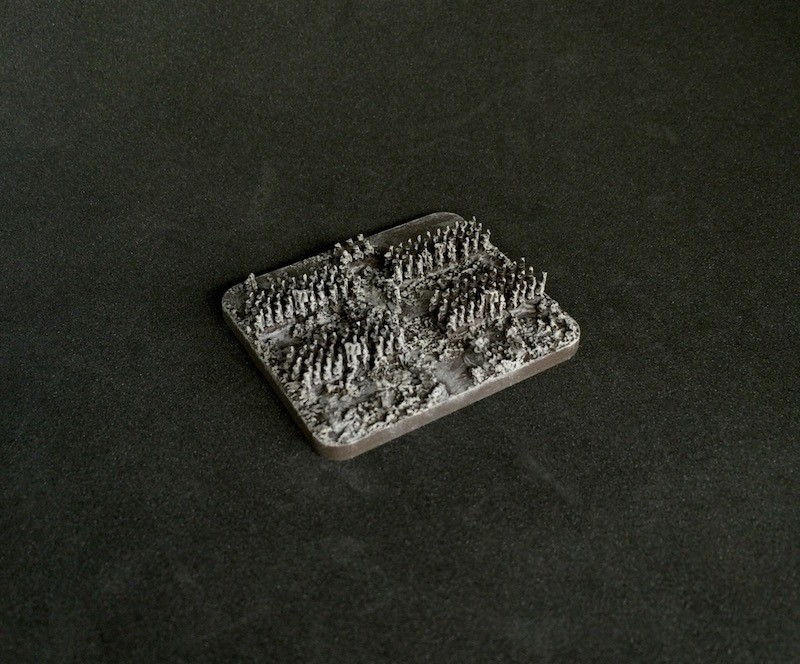 5) Okay, before I carry on I should outline a few opinions I have regarding painting in this scale: The way I see it is that these figures should simply convey their primary features, firstmost being their national uniform colour, with only a nod to other physical elements (namely face, hands, trousers, shako and bayonet), otherwise you can easily get drawn into the rabbit-hole of trying to paint fine details which will never be appreciated when they are seen en mass – in fact I find that too much painted detail can make the figure too ‘busy’, detracting from conveying the main uniform colour: French should primarily be blue, British red, Austrians white, etc. I think of these bases almost like boardgame chits, perhaps more like three dimensional playing tokens. 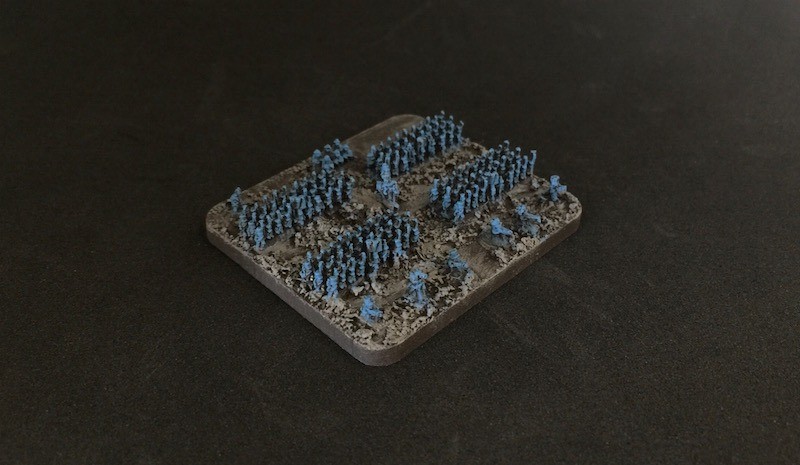 6) Now, back to the figures. Next, I drybrush the castings in their national colour, in this case it’s blue for the French. I pick a fairly unhistorical, vibrant colour as I find the scale needs bright tones to help make the figures stand out.

7) Next I touch in their face and hands, trousers, shako and bayonet tips. The final piece is the tricolour flag. And that’s it for the figures. Perceptive readers will have noticed that, since I base everything from the start, I don’t paint the middle rank or any inward-facing detail. In this scale I only paint the front of the front rank, the rear of the rear rank and the top of their heads. Early on, I discovered that after painting every figure, the interior facing detail is completely lost once the strips of figures are based up. A complete waste of time and effort. So now I just paint the perimeter of the formations and I find that you can’t tell the difference between the ‘all-figure-detail’ bases and those which are more minimalist .

8) The basework is drybrushed two tones of brown with a khaki highlight. I then use a semi-opaque green tinted model railway emulsion to provide a base tone for the light scatter of flock I apply later. I’ll then use a brown ink wash to make ‘tracks’ behind the formations, showing where they have trampled through the terrain. I then paint a mark on the front center which is used in the rules for purposes of line of sight and measurement (it is blue here for the French, but will be red for the British, white for the Austrians, etc.). Finally, I print off a 3.5mm label and affix it to the rear corner of the base (these are so we can use roster sheets for all the unit information).

9) …And here is the finished product (this base is an earlier effort). Again, as you can see, it’s fairly basic and stripped down, but when brought together with their companion bases I think they give a good enough impression of an army. 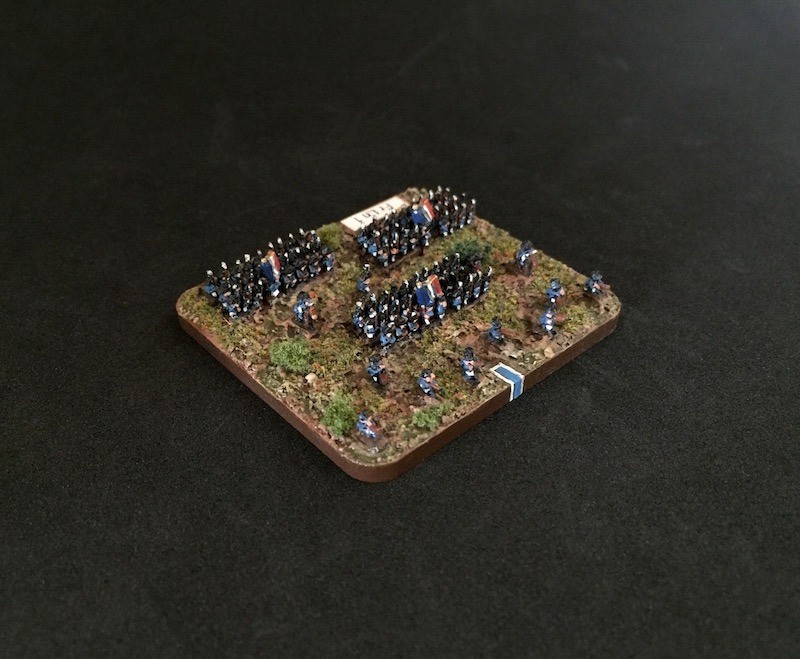 So, there you have it. A new Napoleonic rule set and a new scale to putter around with. The French army is well on its way to being completed so next up is the British and Spanish for some campaigning in the Peninsula.

Thanks for dropping by everyone and have a great week!

Read more from Curt at the Analogue Hobbies blog.