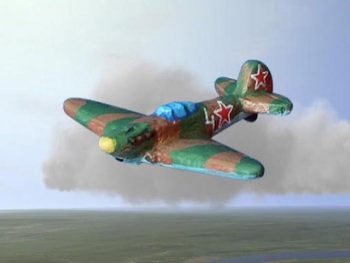 Modified version of the Yak-1 with a bubble canopy and other small improvements.

The Yakovlev Yak-1 was a World War II Soviet fighter aircraft. Production began in early 1940. It was a single-seat monoplane with a composite structure and wooden wings.[1]

The Yak-1 was manoeuvrable, fast and well armed,[1][2] and it was easy to maintain and reliable.[3] It formed an excellent basis for subsequent developments from the Yakovlev bureau. It was the founder of a family of aircraft, with some 37,000 being built.[4][5] As a reward, designer Alexander Yakovlev was awarded the Order of Lenin (Russian: Орден Ленина, Orden Lenina) – the highest decoration bestowed by the Soviet Union – a 100,000 ruble prize, plus a Zis[6] motor car.