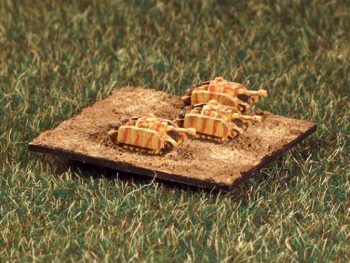 Most common version of this assault gun

Sturmgeschütz (or StuG) meaning “assault gun” was a series of armored vehicles used by both the German Wehrmacht and the Waffen-SS armored formations during the Second World War that primarily consisted of the StuG III and StuG IV. The most common of the two, the StuG III, was built on the chassis of the proven Panzer III. The StuG III was initially designated “StuG” but with the creation of the StuG IV it was re-designated the “StuG III” to distinguish the two. Initially they were intended as a mobile, armored gun platform, providing close fire support to the infantry to destroy bunkers, pillboxes and other entrenched positions. As the war progressed a number of aspects of the StuG series made them a valued supplement to the panzer forces.

Be the first to review “StuG IIIG (15 pcs)” Cancel reply