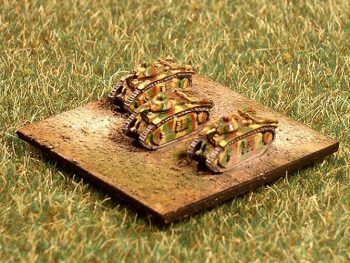 The Char B1 was a French heavy tank manufactured before World War II.

The Char B1 was a specialised heavy break-through vehicle, originally conceived as a self-propelled gun with a 75 mm howitzer in the hull; later a 47 mm gun in a turret was added, to allow it to function also as a Char de Bataille, a “battle tank” fighting enemy armour, equipping the armoured divisions of the Infantry Arm. Starting in the early twenties, its development and production were repeatedly delayed, resulting in a vehicle that was both technologically complex and expensive, and already obsolescent when real mass-production of a derived version, the Char B1 “bis”, started in the late thirties. Although a second uparmoured version, the Char B1 “ter”, was developed, only two prototypes were built.