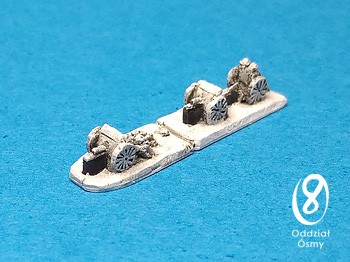 The Ordnance QF 18 pounder, or simply 18-pounder Gun, was the standard British Empire field gun of the First World War-era. It formed the backbone of the Royal Field Artillery during the war, and was produced in large numbers. It was used by British Forces in all the main theaters, and by British troops in Russia in 1919. Its caliber (84 mm) and shell weight were greater than those of the equivalent field guns in French (75 mm) and German (77 mm) service. It was generally horse drawn until mechanization in the 1930s.

The first versions were introduced in 1904. Later versions remained in service with British forces until early 1942. During the interwar period, the 18-pounder formed the basis of early versions of the equally famous Ordnance QF 25 pounder, which would form the basis of the British artillery forces during and after the Second World War in much the same fashion as the 18-pounder had during First.