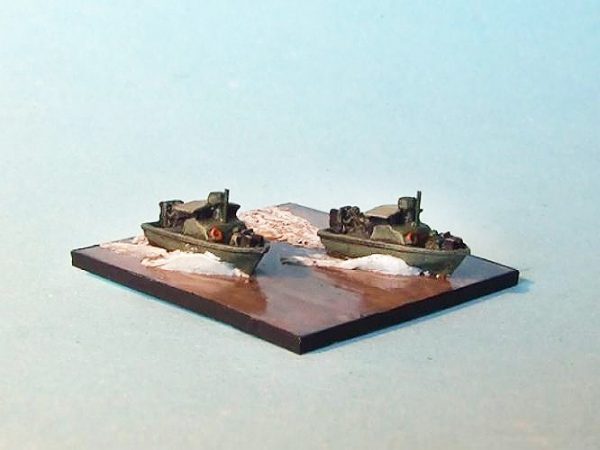 Patrol Boat, River or PBR, is the United States Navy designation for a small rigid-hulled patrol boat used in the Vietnam War from March 1966 until the end of 1971. They were deployed in a force that grew to 250 boats, the most common craft in the River Patrol Force, Task Force 116, and were used to stop and search river traffic in areas such as the Mekong Delta, the Rung Sat Special Zone, the Saigon River and in I Corps, in the area assigned to Task Force Clearwater, in an attempt to disrupt weapons shipments. In this role they frequently became involved in firefights with enemy soldiers on boats and on the shore, were used to insert and extract Navy SEAL teams, and were employed by the United States Army’s 458th Transportation Company, known as the 458th Seatigers. The PBR was a versatile boat with a fiberglass hull and water jet drive which enabled it to operate in shallow, weed-choked rivers. It drew only two feet of water fully loaded. The drives could be pivoted to reverse direction, turn the boat in its own length, or come to a stop from full speed in a few boat lengths. Typical armament configuration included twin M2HB .50 caliber (12.7 mm) machine guns forward in a rotating shielded tub, a single rear M60, one or two 7.62 mm light machine guns mounted on the port and starboard sides, and a Mk 19 grenade launcher. The PBR had a top speed of 32 mph.