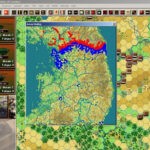 While NATO and Warsaw Pact forces had been staring at each other across the Iron Curtain for 40 years as the Cold War became increasingly hot, similar tensions existed on the Korean Peninsula. During the mid ’80s, the Cold War reached a boiling point as the ideologies of communism and capitalism were in their most confrontational posture. It would only take a spark to reignite the war that had never officially ended in 1953