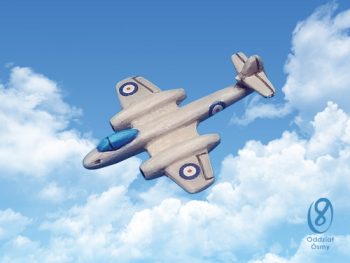 Originally produced as the Gloster Meteor, it was the first British jet fighter and the Allies’ only jet to achieve combat operations during WWII.

The F.8 model was introduced in 1954.  It was known as the “Meteor Prone Pilot” since it placed the pilot in a prone position to counteract the level of inertia the plane reached.