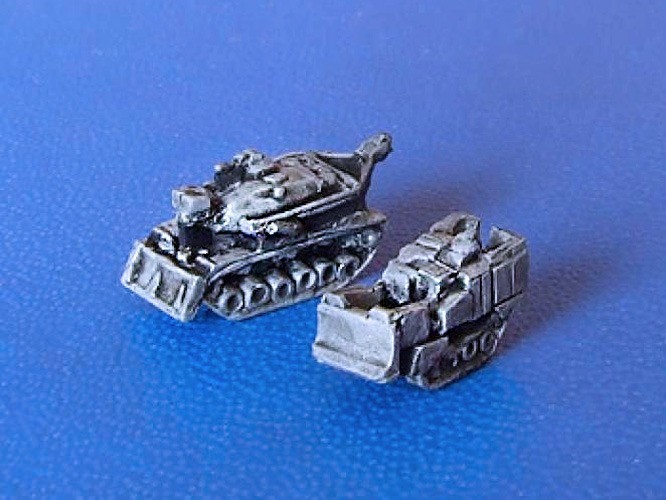 The M9 (ACE) Armored Combat Earthmover is a highly mobile armored tracked vehicle that provides combat engineer support to front-line forces. The M9 is a highly mobile, armored, amphibious tractor, dozer, and scraper. By making a small tractor/scraper, it was possible to create a lightweight vehicle that could use local material as ballast. The weight was kept low enough to allow transportation in smaller cargo aircraft, to be air-droppable, and to allow the vehicle to float and swim. It was finally fielded by the United States Army in 1986, and is capable of supporting forces in both offensive and defensive operations. It performs critical combat engineer tasks such as digging hull defilade fighting positions for guns, tanks and other battlefield systems to increase their survivability. The ACE breaches berms, prepares anti-tank ditches, prepares combat roads, removes roadblocks and prepares access routes at water obstacles. It has a range of 200 miles and a top speed of 30 mph. The M9 is armored against small arms and artillery fragmentation, has smoke screening capability, and chemical-biological protection for the operator.

The M728 Combat Engineer Vehicle (CEV) is a military engineering vehicle based on an M60A1 Patton main battle tank chassis with a hydraulically operated dozer blade mounted on the front, thus effectively functioning as an armored bulldozer, plus an A-frame crane boom hinged on either side of the turret and a winch. The armament was changed from the 105mm M68 rifled tank gun used on the standard M60/A1/A3, to a 165mm M135 short-barrelled demolition gun with 30 rounds of HEP (high explosive, plastic) ammunition. Depending on the usage, the gun can be depressed and elevated against targets up to an effective range of 1,012 yd. The gun’s primary purpose is for clearing defensive fixtures and obstacles, such as walls, fences, roadblocks and bunkers, or for destroying buildings and is generally not meant to be for use in anti-personnel or anti-tank warfare. The main gun has a coaxial 7.62×51mm NATO M240 machine gun, with 2,000 rounds of 7.62mm ammunition. In addition, a .50 caliber M85 machine gun is mounted in the commander’s cupola; this has 600 rounds of ammunition. As an alternative to the mounted dozerblade, the vehicle can be equipped with a mine clearing rake for clearing land mines. Some M728s were acquired for use by the United States Department of Justice’s FBI and ATF SWAT teams to conduct potentially dangerous operations. In particular, it has become associated with the 1993 Siege of Waco, Texas. It has a range of 280 mi and a top speed of 30 mph.