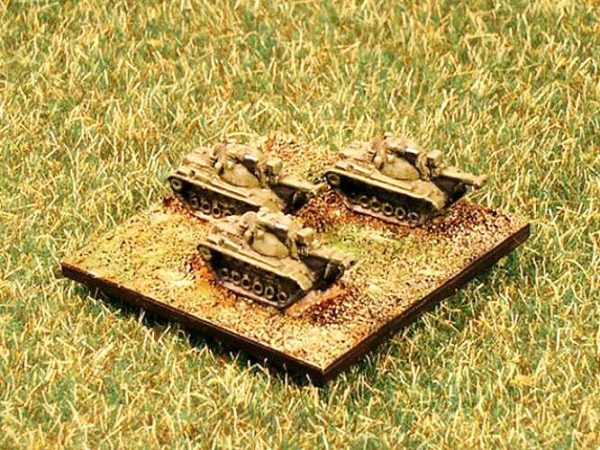 The M48A3 “Patton” was America’s main battle tank in Vietnam from the earliest combat action, and in South Vietnamese service almost to its last. The M48 was the final version of the Patton series, named after General George S. Patton. The first M48s were produced from 1952 to 1959, but the Vietnam-era A3 was a modernized and refurbished variant that first rolled out in February 1963. It had a supercharged diesel instead of a gasoline engine and an enhanced fire control system. The turret and hull were made from cast homogenous steel and enjoyed a 60-degree frontal slope. The turret had 4.5 inches of frontal armor, 3 inches of side armor and 2 inches in the rear. The hull’s front armor was 4.3 inches, and side armor was 3 inches forward and 2 inches at the rear. Inch-thick floor plating gave good protection against enemy mines. The M48’s 90mm M41 cannon fired a 24.16-pound shell with a muzzle velocity of 2,800 feet per second out to a maximum range of 4,500 meters, but the fire control system had a 2,500-meter limit. The gunner used an M17A1 coincidence rangefinder, and the fire control system included a repeater that displayed the gunner’s sight picture to the commander. A coaxial .30-caliber machine gun and a .50-caliber gun in, or mounted on, the commander’s cupola rounded out the tank’s armament. The M48A3’s wide tracks gave it good off-road mobility, but Vietnam’s exceptionally soft, deep mud frequently bogged it down. Its shallow fording depth (4 feet) and weight could limit its employment. A kit was available that enabled the tank to ford rivers up to 14 feet deep, but it was rarely used. the M48A3 had a top speed of 30mph on paved road and 15mph off road. It had a range of 300 mi.