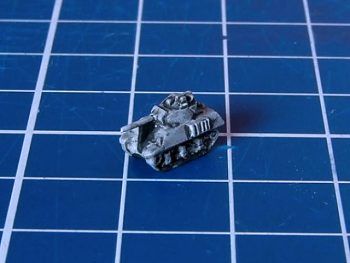 Tank destroyer with a 76 mm gun.

The M10 tank destroyer was an American tank destroyer of World War II. After US entry into World War II and the formation of the Tank Destroyer Force, a suitable vehicle was needed to equip the new battalions. By November 1941, the Army requested a vehicle with a gun in a fully rotating turret after other interim models were criticized for being too poorly designed. The prototype of the M10 was conceived in early 1942, being delivered in April of that year. After appropriate changes to the hull and turret were made, the modified version was selected for production in June 1943 as the 3-inch Gun Motor Carriage M10. It mounted a 3-inch (76.2 mm) Gun M7 in a rotating turret on a modified M4A2 Sherman tank chassis. An alternate model, the M10A1, which used the chassis of an M4A3 Sherman tank, was also produced. Production of the two models ran from September 1942 to December 1943 and October 1942 to November 1943, respectively.

Please note this is a 3D printed, resin cast model of the M10.