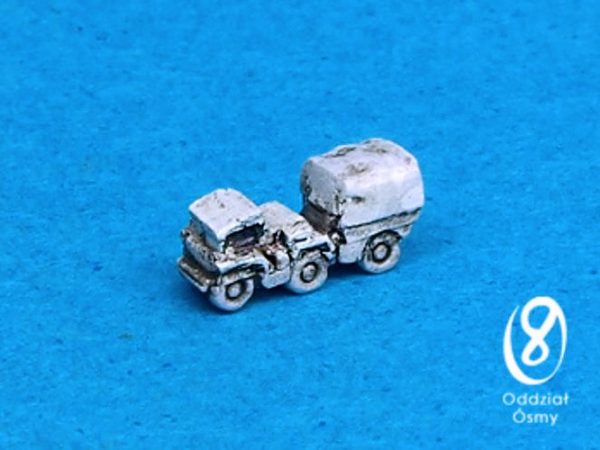 The Gama Goat was a six-wheel-drive semi-amphibious off-road vehicle originally developed by Ling-Temco-Vought and manufactured by CONDEC for use by the US military in the Vietnam War. The vehicle’s nickname came from two sources; “Gama” from the name of the inventor of its powered articulated joint, Roger Gamaunt, and “Goat” for its mountain goat-like off-road ability. Its military designation was M561, 6×6 tactical 1¼-ton truck. The concept for the vehicle came when the French Army reported that the US Army trucks provided to them were woefully inadequate for the terrain in Vietnam. In 1959, ARPA (now known as DARPA) funded a research project called Project ‘Agile’ to develop a new tactical truck for the Southeast Asia theatre, as well as other projects of interest to the then-looming Vietnam War. The ‘Goat used an articulated chassis, so that from distance it appears to be a four-wheel drive vehicle pulling a two-wheel trailer, but it is a single six-wheel vehicle with a four-wheel steering arrangement with the front and rear wheels turning in opposite directions. It was famous for its ability to travel over exceptionally rough and muddy terrain. While the Gama Goat had exceptional off-road ability, its quirky steering made it hard to handle on pavement, and its tendency to flounder in amphibious operations required drivers to have special training in order to operate it. This meant that it could not be the “general purpose” vehicle the Army had hoped for, and production was halted after the original contract expired. The Gama Goat had a range of 420 mi and a top speed 56 mph.

Be the first to review “Gama Goat (15 pcs)” Cancel reply