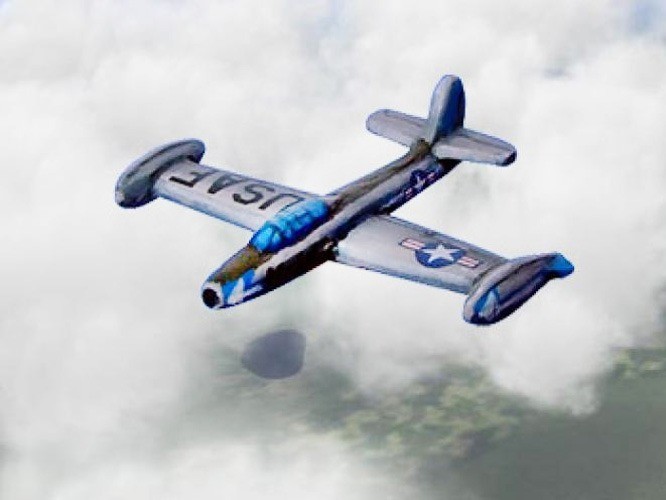 The Republic F-84 Thunderjet was an American turbojet fighter-bomber aircraft. Originating as a 1944 United States Army Air Forces (USAAF) proposal for a “day fighter”, the F-84 first flew in 1946. Although it entered service in 1947, the Thunderjet was plagued by so many structural and engine problems that a 1948 U.S. Air Force review declared it unable to execute any aspect of its intended mission and considered canceling the program. The aircraft was not considered fully operational until the 1949 F-84D model. The Thunderjet became the USAF’s primary strike aircraft during the Korean War, flying 86,408 sorties and destroying 60% of all ground targets in the war as well as eight Soviet-built MiG fighters. The F-84 was the first production fighter aircraft to utilize inflight refueling and the first fighter capable of carrying a nuclear weapon, the Mark 7 nuclear bomb. By the mid-1960s, the F-84/F-84F was replaced by the F-100 Super Sabre and the RF-84F by the RF-101 Voodoo in USAF units, being relegated to duty in the Air National Guard. The last F-84F Thunderflash retired from the ANG in 1971. The F-84 has a maximum speed of 622 mph and a range of 1,000 mi. Its armament consist of six .50 in (12.7 mm) M3 Browning machine guns and up to 4,450 lb of rockets and bombs, including one Mark 7 nuclear bomb.