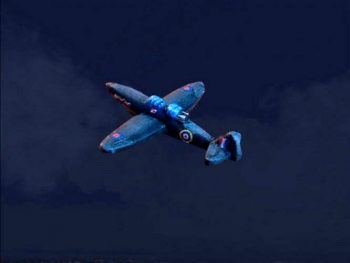 The Boulton Paul Defiant was a British interceptor aircraft that served with the Royal Air Force (RAF) during World War II. The Defiant was designed and built by Boulton Paul Aircraft as a “turret fighter”, without any forward-firing guns. It was a contemporary of the Royal Navy‘s Blackburn Roc. The concept of a turret fighter related directly to the successful First World War-era Bristol F.2 Fighter.

In combat, the Defiant was found to be reasonably effective at its intended task of destroying bombers but was vulnerable to the Luftwaffe‘s more manoeuvrable, single-seat Messerschmitt Bf 109 fighters. The lack of forward-firing armament proved to be a great weakness in daylight combat and its potential was only realised when it was converted to night fighting.[2] It was supplanted in the night fighter role by the Bristol Beaufighter and de Havilland Mosquito. The Defiant found use in gunnery training, target towing, electronic countermeasures and air-sea rescue. Among RAF pilots it had the nickname “Daffy”.

Be the first to review “Defiant (8 pcs)” Cancel reply