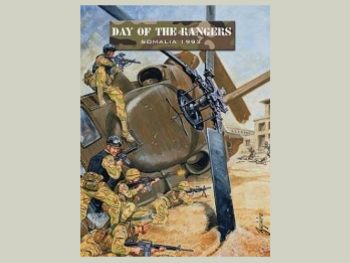 Day of the Rangers

In the early 90s, Somalia was a country in chaos – warlords carved out their own territories, enforcing their will through militia gangs, civil war raged, and famine compounded the situation. As a joint US-UN mission struggled to maintain order, the warlords began to unite behind Mohamed Farrah Aidid, who was to proclaim himself President of Somalia and embark upon a campaign to force the peacekeepers out of the country. Operations against Aidid and his strongholds intensified, culminating in the famous Operation Gothic Serpent, and the rescue mission to save a downed Black Hawk helicopter carried out by US Rangers and Delta Force operatives. Day of the Rangers, the latest companion for Force on Force, provides wargamers with all the background, orders of battle, and scenarios they need to immerse themselves in the epic battle for Mogadishu.

Be the first to review “Day of the Rangers” Cancel reply