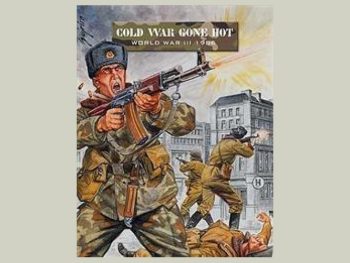 With the orders of battle, vehicle stats and missions included in this volume, Force on Force players can simulate the advance of Soviet tanks across Western Europe, a thrust into Alaska, or any number of other plausible scenarios where history took a slightly different path.

“My fellow Americans, I’m pleased to tell you today that I’ve signed legislation that will outlaw Russia forever. We begin bombing in five minutes.” Ronald Reagan, 1984.

With these words, spoken as a sound check to a radio broadcast, President Reagan came dangerously close to igniting the long-simmering Cold War. Although Soviet forces were placed on alert following reports of this comment, the full-scale conflict between the West and the Soviet Bloc did not break out. Cold War Gone Hot, the latest companion volume for Force on Force, looks at the 44-year history of the Cold War and asks: “what if?”