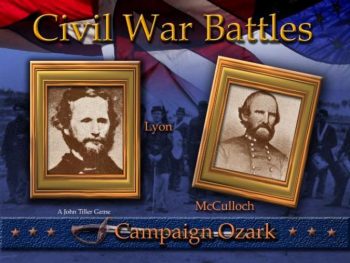 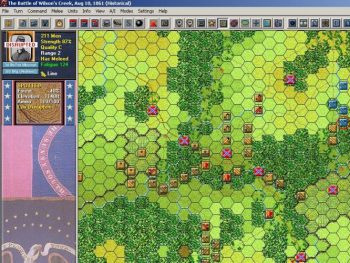 The early years of the American Civil War witnessed several desperate struggles for possession of the vast Ozark region of Missouri and Arkansas.

The fate of embattled Missouri was crucial to the war efforts of both sides and Campaign Ozark depicts these decisive conflicts in three campaigns: (1) 1861 Missouri Campaign: Lyon’s offensive across the length of Missouri from Boonville to Carthage and Wilson’s Creek, (2) 1862 Pea Ridge Campaign: Curtis’s drive from Missouri into Arkansas culminating in the battle of Pea Ridge, (3) 1862 Fall Campaign: Newtonia and Cane Hill to Hindman’s counter-stroke at Prairie Grove.

The heart of the game are the 3 campaigns. Bonus scenarios covering the siege and relief of Lexington are included. Campaign Ozark also contains 79 scenarios, including the historical battles of Pea Ridge, the Siege of Lexington, and many others. Though every scenario may also be played as a stand-alone, the bulk of the scenarios are integrated into the operational/tactical campaigns, providing a high degree of replay value.

At each stage of a campaign, players choose from 2-4 operational decisions that will result in a tactical battle to be played out on an expansive map, providing room for maneuver. The campaign is non-linear, with both offensive and defensive operational options available to each side.