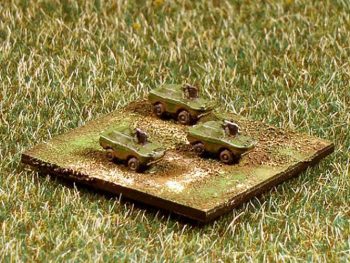 The BRDM-1 (Bronirovannaya Razvedyvatelnaya Dozornaya Mashina, Бронированная Разведывательная Дозорная Машина, literally “Armored reconnaissance/patrol vehicle”[2]) was an amphibious armored scout car used by Russia and the former Soviet Union. It was originally known simply as BRDM but when the BRDM-2 entered production and service with Soviet Army in 1962, it received the designation BRDM-1. The BRDM (also known as the BTR-40P) first appeared in 1957, and was in production until 1966. Total production was around 10,000 vehicles, less than 600 remain in the reserves of a number of countries.