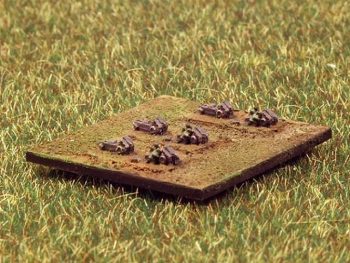 Development of the gun began in 1927, by Rheinmetall. The crew was protected by an armoured shield. There was a mountain gun variant, the 7.5 cm le.GebIG 18. For transport, the mountain variant could be broken down into six to ten packs, the heaviest weighing 74.9 kg. These were typically assigned at two to each mountain battalion. Six 7.5 cm le.IG 18F were manufactured in 1939. These were airborne guns, capable of being broken down into four 140 kg loads. The airborne variant had smaller wheels and no shield. There was also an infantry support gun, known as the 7.5 cm Infanteriegeschütz L/13, which was designed as a replacement for the le.IG 18, this gun could be broken into four to six loads. However, though prototypes were tested, the German army felt that it did not improve on the existing design sufficiently to merit introduction and the army stayed with the earlier gun.