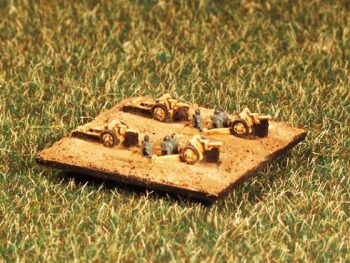 The 10.5 cm leFH 18/40 supplemented the 10.5 cm leFH 18 and the 10.5 cm leFH 18M as the standard divisional field howitzer used during the Second World War. It was designed in an effort to lighten the weight of the 105 mm artillery piece and to make it easier to produce. Generally it did not equip independent artillery battalions until after the Battle of Stalingrad in 1943. Some were also exported to Finland, where they were known as 105 H 33-40.
The Romanian Army acquired a number of leFH 18/40 in 1943, to make up for the losses in artillery suffered during the Battle of Stalingrad.[2]